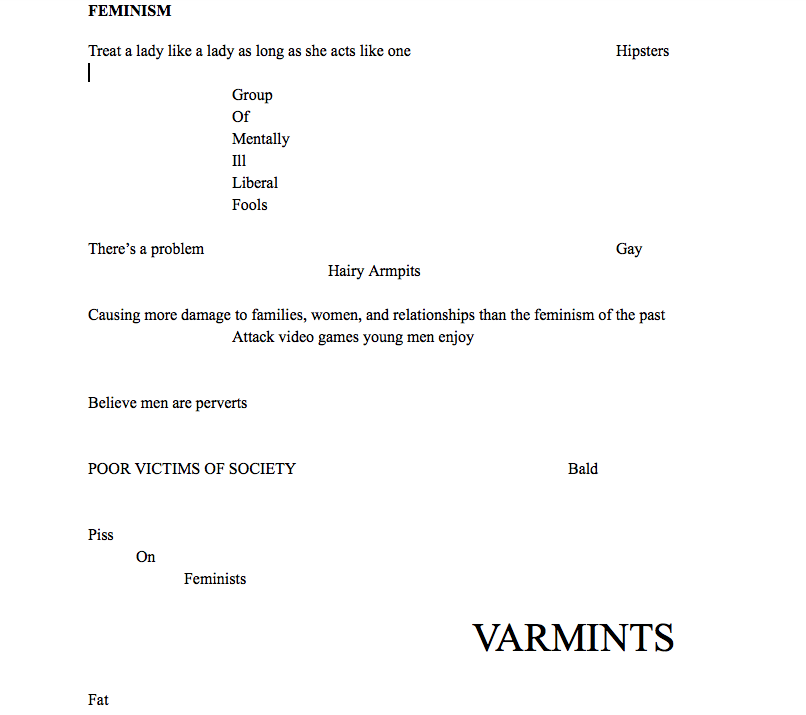 I’m going to give you a little background information about myself and why I chose the topic of Feminism for my found poem. I have a big family, I have two brothers and two sisters and growing up I would often find myself almost competing with my younger brother. As I grew older I began to realize how different things were for me than things were for him. I love my parents very much however they are parents are very sexist. Still to this day my parents give my younger brother more freedom than I have ever had and he is two years younger than me and extremely irresponsible. However, I found myself reaping the consequences of never being able to have that much freedom especially when I got to  highschool. In highschool if a girl chose to dress however she wanted or do whatever she pleased she was often labeled a “slut.” I couldn’t wait to leave high school because I craved freedom and I wanted to be able to do whatever I wanted. Since I was never allowed to do anything in high school when I did come to college I went a little crazy my first semester of my freshman year. I remember hearing girls call me a “whore” and judge me for the things I decided to wear. Many people girls especially weren’t too fond of me because of the clothes that I decided to put on my body even though it didn’t affect them. I was being shamed by girls AND guys and I remember having a breaking point because I didn’t know why no one liked me or what I did that was so bad. I started to see change in myself my sophomore year of college. I remember reading “We Should All Be Feminists” by Chimamanda Ngozi Adichie and it changed my life. I didn’t know the word for what I was. I always thought negatively about feminists. But I am a feminist and I believe that women and men and all types of people should be free to express themselves how they want. Boys and girls should not be treated so differently and girls should not be shamed for the things boys are applauded for. I want to break gender stereotypes because they drive me nuts and I believe that everyone is equal and one’s gender or race or sexual orientation should not be held over their heads.

I chose a forum about feminism because many people are uneducated about what feminism is and what feminists typically believe. There are many negative connotations that come along with being a feminist. Many of the comments bash feminists and many people seem to think that feminists like to depict men as the bad guy however that isn’t true. Feminism is about equality of all people not just women. However, things are different for women than they are for men and feminisms bring that to people’s attention.

In my found poem I chose the insulting and negative comments that stood out to me. I hope you all enjoy!