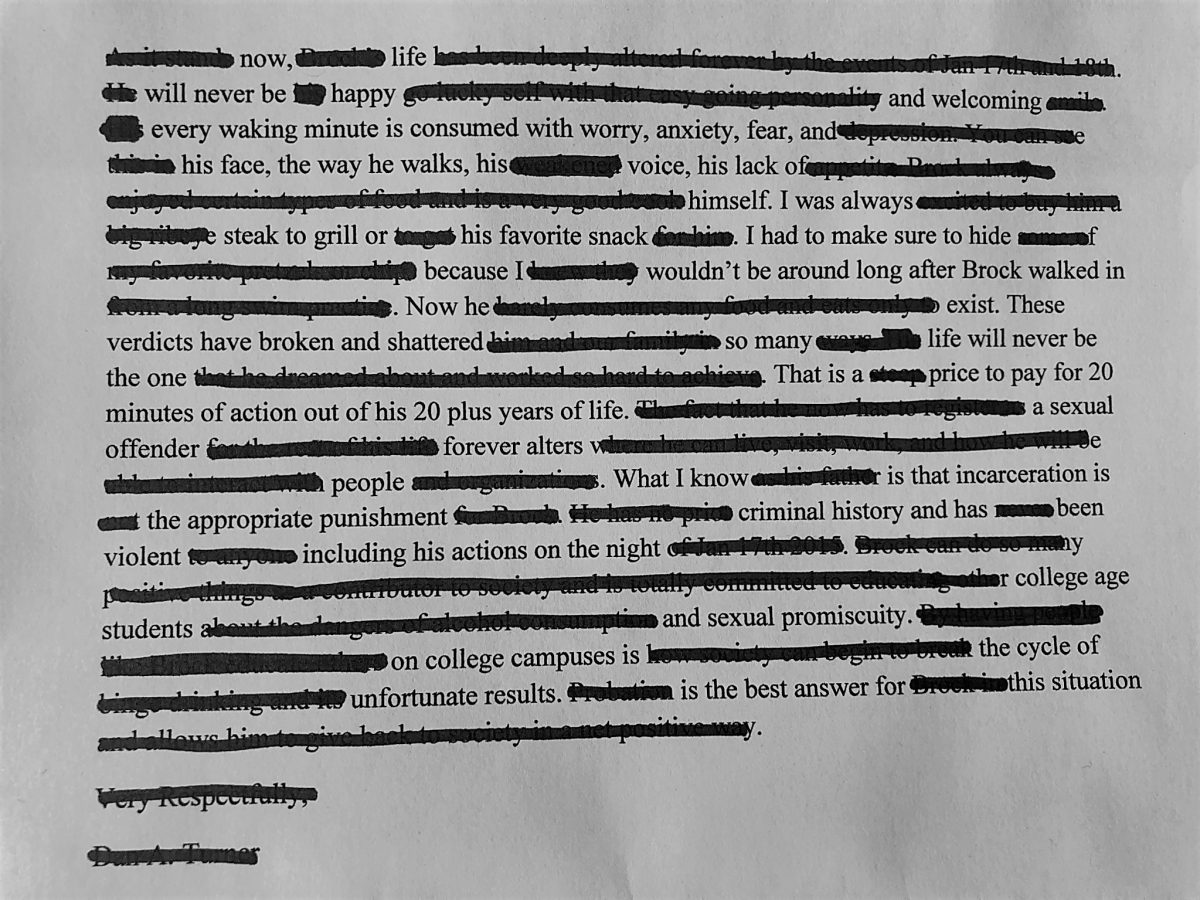 For my found poem, I decided to take the last paragraph of Brock Turner’s father’s statement to the judge. I’m sure we all know the backstory of this event, and how horrific it was, not only for the victim but for people who had been raped and were hoping for a fair trial.

In creating this poem, I chose the last paragraph as it was the part that I think bothered me the most. For something this dark and heavy, I felt that one small paragraph would suffice. Cutting and pasting in different sequences didn’t feel right to me, not when I had his words right there just waiting to be highlighted or redacted. So many of his words align with the idea that we live in a rape-culture. I wanted to keep the words in the order that Dan Turner put them in. They are his words, but I wanted to block out all the fluff to get to the real message underneath… for all the victims and to point out the flaws in our society when it comes to rape.

Hello fellow classmates! I hope you all enjoyed reading parts of Zong! by M. NourbeSe Philip! There is so much to dissect here, but what I found intriguing and also quite engaging was Philip’s use of fugue. So, if you all don’t mind, I’m going to hash out all the ideas I have here.

Fugue is typically seen in a musical sense, which is fitting because Philip sees Zong!’s structure as “…more towards the lyric and less towards language” (197). She uses fugue as “…a frame through which I could understand Zong!” (204). For a while she wrestles with the poems as a whole, saying that there are in fact two poems at play here, “… the one I want to write and the one writing itself” (192).

First, I would like you all to re-read and compare poems Zong! #1 (3-4) and Zong! #5 (8-13), to Zong! #8 (16) and #9 (17). How did you read them? Did you use the same voice throughout, or a different voice? Did you notice any repetitiveness or common themes? This is essentially fugue, defined by The English Oxford Dictionary as “a contrapuntal composition in which a melody or phrase (the subject) is introduced by one part and successively taken up by others and developed by interweaving the parts”, and also “a loss of awareness of one’s identity… associated with certain forms of hysteria and epilepsy” (“fugue,” [English Oxford Dictionary]).

*Here is an example of a birthday fugue, if you’re like me and need extra help understanding the definition! *

Both definitions of fugue are utilized by Philip to place the reader on the Zong during those long, cruel weeks with little to no water, and of course the slaughter of 150 slaves. She appeals to our sense of hearing, and by arranging her poems in this way, gives up snippets of what one might have heard on the Zong: moans, cries, and chants from the enslaved (3), as well as the cold calculative voices of those who doomed them (5). Sometimes, these even occur on the same page (9). There is a feeling of mass hysteria, and loss of individuality. Most likely, many of the slaves could not understand each other because of the many different African languages. Even more likely is that they could not understand the crew’s command to be thrown overboard and sentenced to death by drowning, adding to the hysteria effect. They are no longer Bantu, Ibo or Yoruba; now they are just humans fighting for “…sustenance…” (5,9,11,12, 17) and “…preservation…” (6). We could even venture to suppose that the poems she wanted to write was the voice “…of someone who appears to be white, male, and European” (204), but the poem that seemingly wrote itself were the voices of the slaves.

In this video, if you skip to minute 20 you will get to see Philip preforming Zong! #5, and I believe about five minutes in she switches to another part in the book that I have yet to find. However, I think it’s a commanding visual, and you can also hear the different voices I discussed earlier.

Here is another live reading, much different than the video above. What voice/s do you hear in this reading?

Some questions to consider:

*Also, sorry for the formatting, this was copied/pasted from Word because I found it easier, I know there’s an issue with formatting of my first work cited, I can’t figure out how to fix it!*

Hey guys my name is Paige and I’m not really sure what to write about. I work a lot.. I’m actually typing this on my break so I need to be fast!!

The basics are: I commute from Vestal to Cortland everyday (majoring in Speech Pathology), I work almost everyday (pretty much full time), and I have a year old boxer puppy who eats everything (anyone want a free dog?!?!). Once upon a time I used to write poetry and then realized I would never make money so I stopped.

I guess that’s all so see you guys tomorrow!